It’s Easter time! In the Christian tradition, Easter celebrates the resurrection of Jesus three days after he died on the cross on Good Friday. Easter comes with its own fair share of delicious treats. In the Netherlands we nowadays eat little chocolate Easter eggs and Easter bread. The bread is richly filled with currants and has a long tradition. There are still a few recipes left to us from the 18th century. One of them you can find in the new (Dutch) cookbook with historical bread recipes.

This article was written by Lorin Posthumus, volunteer at eet!verleden. She also took the pictures for this blog. Lorin is writing a blog series about the food history of England.

A similar treat in Easter time are hot cross buns from England. These are traditionally eaten before Easter on Good Friday. They are small, round buns with spices and raisins in them and with a cross on top. They are a typically English treat and there are many stories about where and when they find their origin.

When it comes to folk food, mostly there are a lot of theories about their origins. A for hot cross buns. The oldest story is that they find their origin in pagan beliefs, where the cross on top symbolizes the rebirth of the world after winter, and the four phases of the moon, and also the four seasons. The pagans for sure packed it with symbolism! In Christianity, especially in the Church of England, the cross represents the cross on which Jesus Christ died, and his resurrection.

As time went on, the buns became a victim to more and more superstitions. One of them was that when you baked the buns on Good Friday, they would not perish or go stale. It was also believed that hot cross buns made on Good Friday brought good fortune, so they were often given to sailor men sailing out to sea, hoping they would have a safe journey and return home. 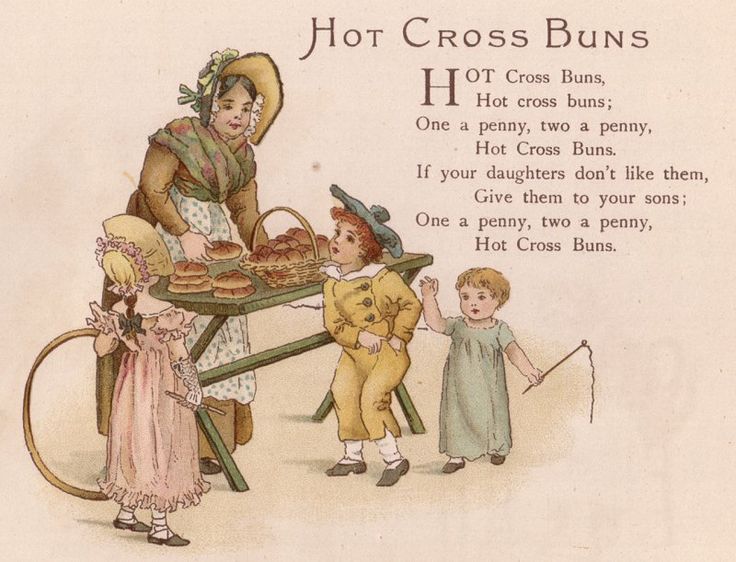 Nowadays, the buns are decorated with a cross of icing or something else sweet. Traditionally, however, the cross would be made with dough or even just be a notch made with a knife before baking the buns. The covering with dough or sweet icing is a modern twist, much like adding candied fruits instead of just raisins. 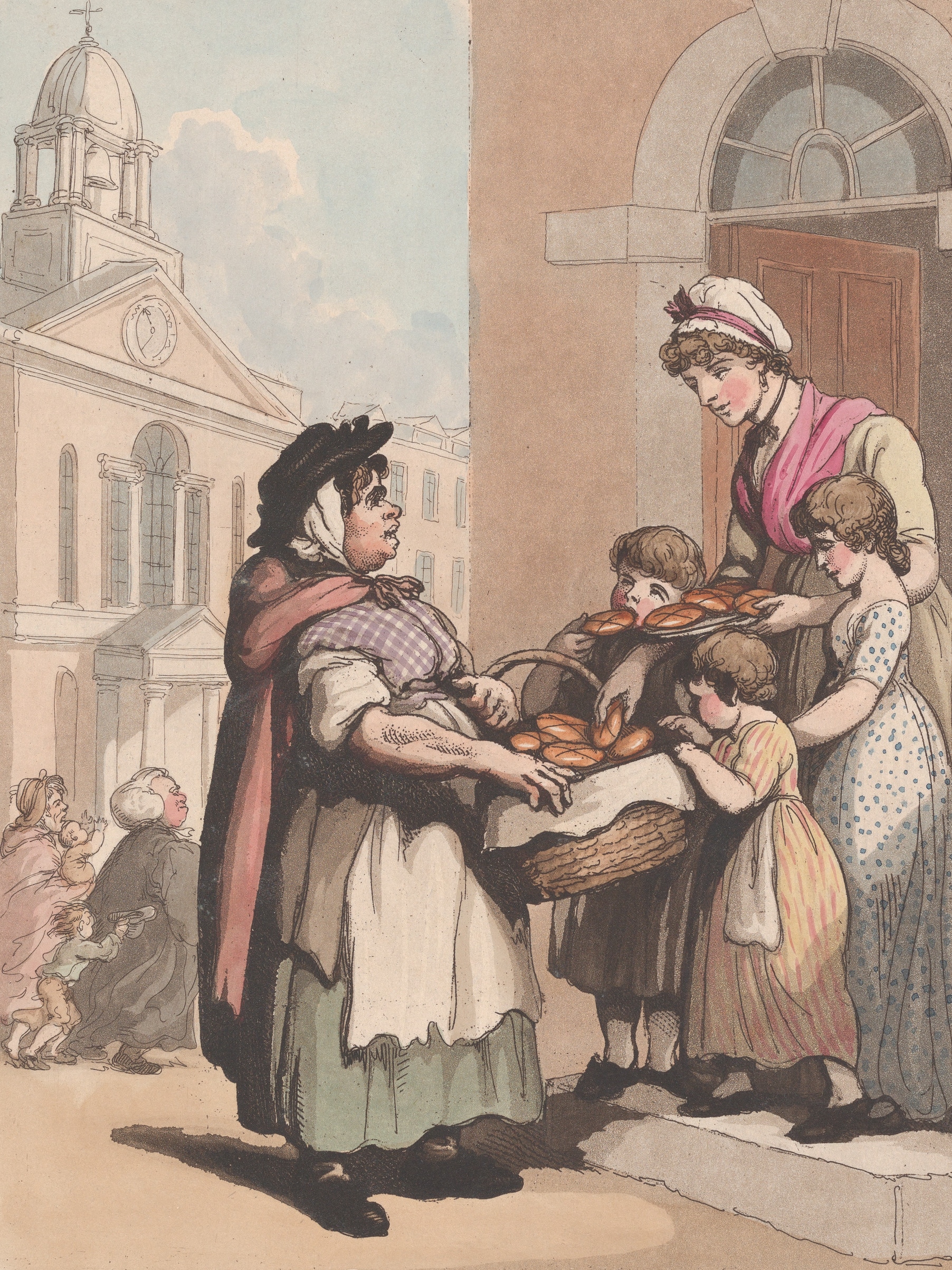 For our recipe we dove into our trustworthy Book of Household Management by Mrs. Beeton. She has a hot cross bun recipe we wanted to use. This recipe proved to be very accurate and they turned out very tasty. We did not have to adapt a thing. They were absolutely scrumptious! The only thing we did change was the amount of ingredients we used. We used half of what Mrs. Beeton advised, because this amount already makes around a dozen buns. If you want to make more: go ahead and double the amount of ingredients you use. 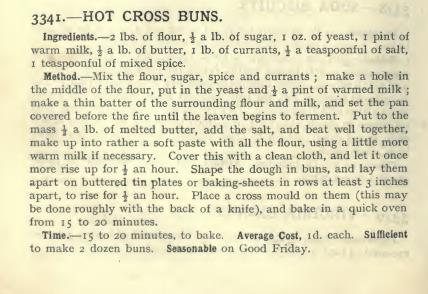 Preparation
Mix the flour, sugar and spice. Make a little well in the middle and pour half of the warm milk and yeast in there. Mix a little with the flour until you have a very thin well of batter in the middle of the flour mixture. Put it in a warm place for about 10-15 minutes.

Add the melted butter and salt and mix. It should form a soft, elastic dough. If it is not wet enough you can add some of the warm milk. Knead for about 10 minutes. Make a flat circle of the dough and put the currants on top. Work them through the dough.

Form twelve firm balls of the dough. Leave them to rest for 20 minutes. Flatten the buns and reshape again into firm balls. Put them on a baking sheet, 5 cm apart. Give them an egg wash if you want. Let them rise for an hour.

Preheat the oven to 240 degrees.

Carve the crosses on the top of the buns using a knife, these carvings should be pretty deep otherwise the crosses won’t show up after baking. Bake the buns in the preheated oven for 10 minutes.

If you would like to make them fancier, you could add different kinds of dried fruits or an icing cross on top after baking, instead of just carving them. Another tasty tip would be to add cinnamon to them instead of allspice. The cinnamon makes for a very warm flavour! 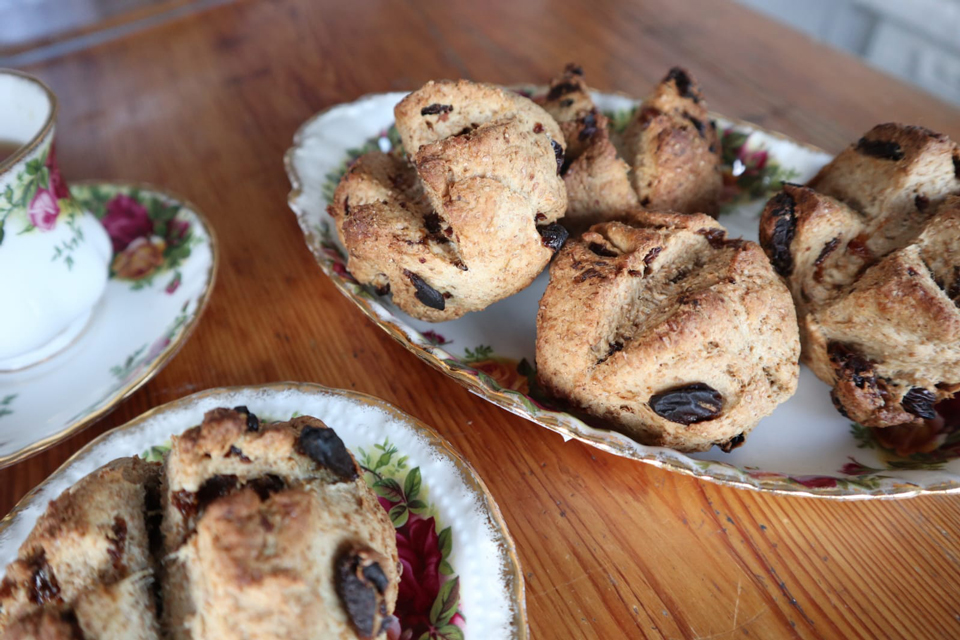