This recipe article was written by Lorin Posthumus, intern at eet!verleden. She did the cooking experiment herself at home, because of the covid-19 lockdown and she also took the pictures for this blog.

Scones are a world-famous British treat many people eat during high tea or tea time. Scones are usually served with jam and thick, clotted cream. There are many variations: sweet ones, ones filled with raisins, or you can simply experiment and add some flaky sea salt on top, perhaps. These delicious small buns have been around for decades, but what exactly is their story?

The first appearance of the word ‘scone’ in print was in a Scottish version of the Aeneid in 1513. The Aeneid is an epic poem in Latin, written by the ancient Roman poet Virgil, between 29 and 19 BC. It tells the legendary story of Aeneas, a Trojan who travelled to Italy, where he became the ancestor of the Romans. The word scone is in chapter three, line 15:

The flour-scones were set in, by and by,
With other messes;
Syne braid trenchers did they fill and charge
With wilde scrabs, and other fruits large 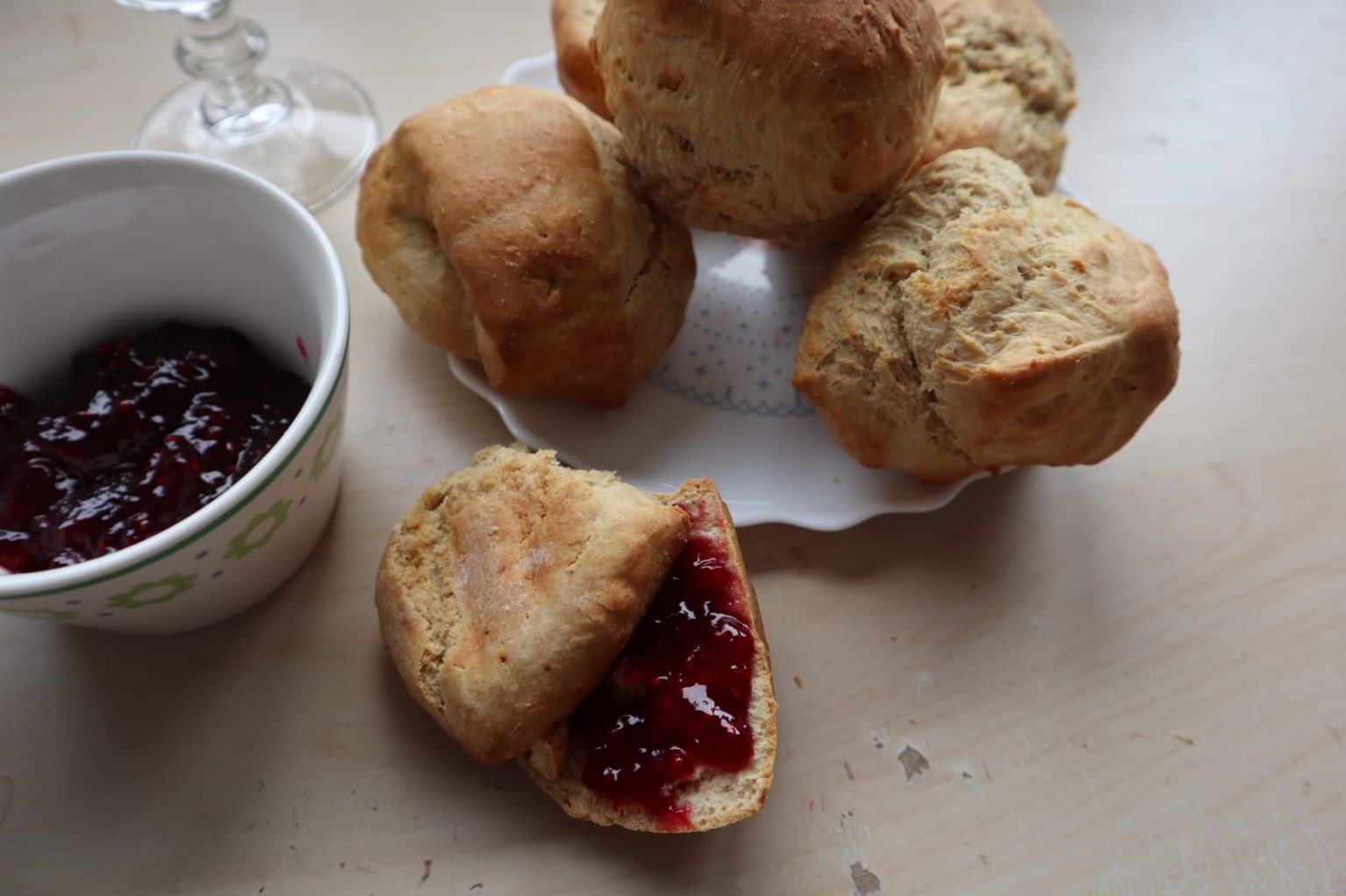 Scones as we know them are a traditional British treat during tea time, which is usually at 4 p.m. sharp. Tea time at 4 p.m. has been a tradition since the 1840s, when Anne, duchess of Bedford (1788 – 1861), made it popular. The story goes that she ordered her servants to bring her some sweet pastries and different kinds of bread, including scones, and tea into her room around 4:00 p.m. Dinner time in Duchess Anne’s time was not until 8 or 9 p.m. So, she sought something to fight off the dull feeling in between lunch- and dinnertime. In the duchess’ time, tea was only for the rich. This is why the tradition of ‘afternoon tea’ only flourished amongst the wealthy. It became more than a small meal to fight off a bit of hunger, it became a way to show off your wealth as well.

Mrs Beeton’s famous Book of Household management also has a recipe for ‘Scottish scones’. The recipe is not printed in the actual book but added by hand on a loose sheet of paper at the beginning. Perhaps this was a later addition of hers or her husband’s.

This recipe calls for the use of flour, eggs, butter, castor sugar, sultanas, binatrium carbonate (we call this baking soda), cream of tartar and another ingredient we cannot quite read because the paper has become a victim of the times. After some research, I found out that buttermilk is usually added to scones and this might just be the unreadable ingredient.

We tried out the recipe and oh boy, are they delicious! We decided to leave out the cream of tartar since it is a hard ingredient to come by for an everyday person. At first, we thought that the small amount of butter was a little weird, but as we went on mixing the buttermilk made up for that and it became a nice, cohesive dough. Try the recipe at your own risk because they are simply too good! 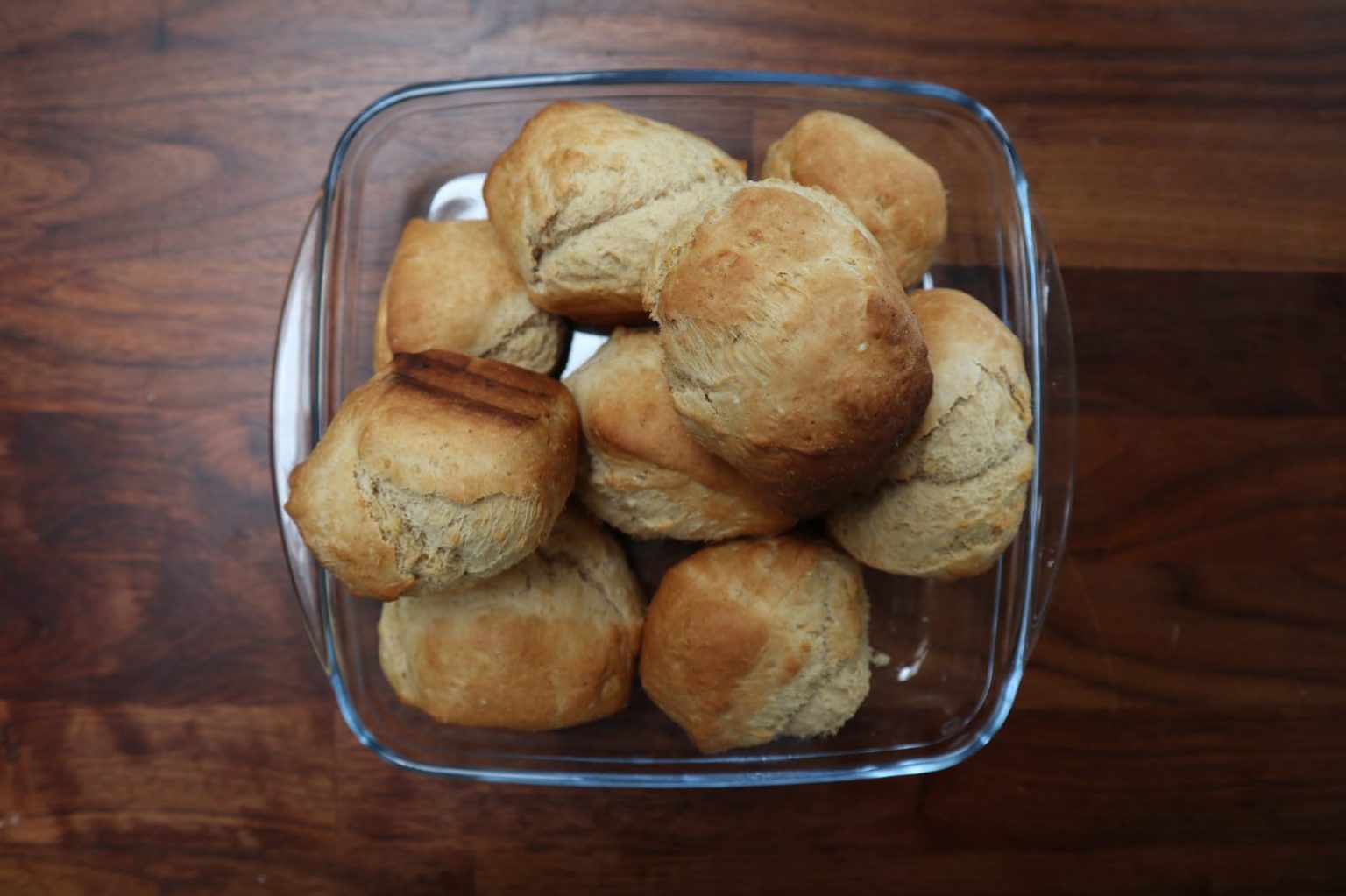 Preparation
Rub the butter into the flour. This works best if your butter is at room temperature, and if you cut it up into smaller pieces. Make sure to mix in the dry ingredients first, before you mix in the butter milk. Mix all together well. Knead it into a bread-dough with your hands. If the dough is too dry, you can add a little bit of the extra buttermilk. If the dough is too sticky, you can add a little extra flour. The dough is ready when it forms a cohesive, non-sticky dough ball.

Shape the dough into an oval shape and cut in half. Then roll the two halves into long shapes and cut them into smaller pieces. Bake them for 20 minutes at 200 degrees. Make sure to watch them, because if they get too brown too soon, the inside might not be cooked yet. If this happens, you can cover them with a piece of aluminium foil and lower the heat a little and leave them in for approximately 5 more minutes. The size of the scones does determine their baking time. With this recipe, I made 10 tennis ball-sized scones. If you make them smaller, their baking time is somewhat shorter and if you make them bigger, the baking time is a little longer.

They are best served with clotted cream and your favourite kind of jam. Enjoy!