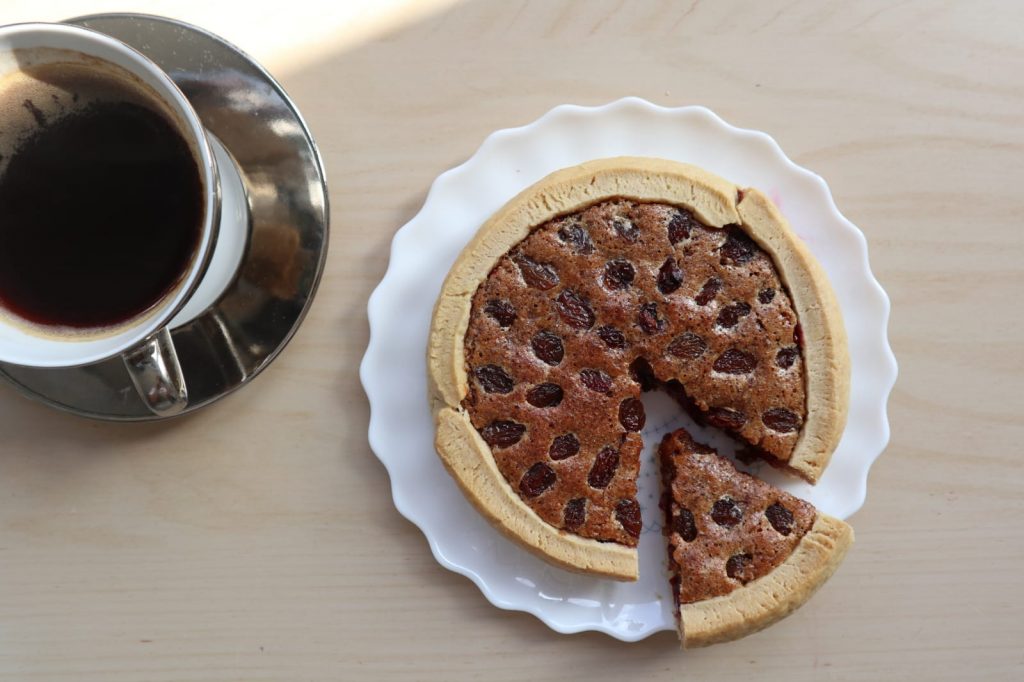 This recipe article was written by Lorin Posthumus, intern at eet!verleden. She did the cooking experiment herself at home, because of the covid-19 lockdown and she also took the pictures for this blog.

Acton’s recipe is definitely for the rich or upper middle class, as we can see. She lists many ingredients that would have been rather expensive around her time, like the candied peel for instance. She even mentions it at the end of her recipe: “This is a rich and expensive, but not a very refined pudding.” As Acton’s recipe indicates, the Bakewell pudding was popular in Derbyshire, which is where the city Bakewell is. 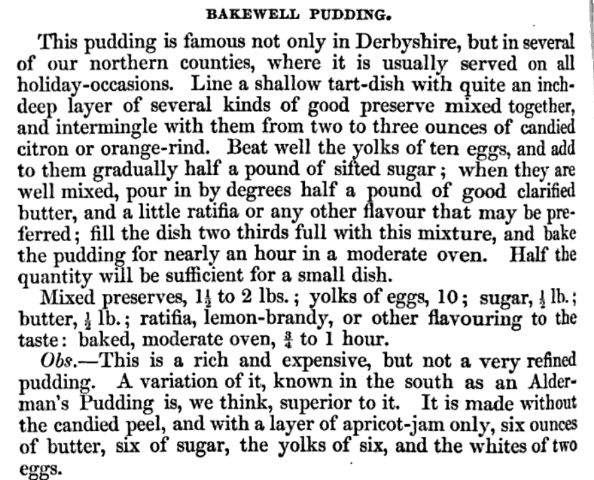 Mrs Acton’s version of the Bakewell pudding/tart was more of a rich custard and it is said to have the consistency of a cheesecake. After this, the recipe evolved and by the time Mrs Beeton gives her recipe in The Book of Household Management (1861), the Bakewell tart has evolved in more of a pudding than a cheesecake, but still not quite a tart. 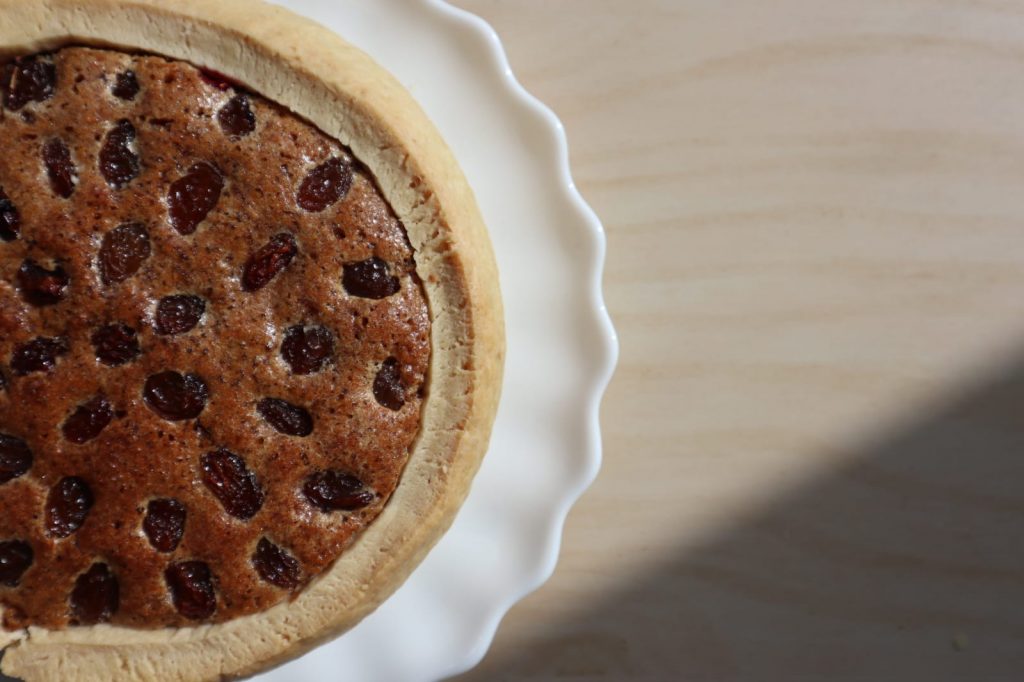 However, there are medieval recipes that are close to the recipe of the Bakewell tart. There is a recipe in A Proper Newe Booke of Cookerye (1545) for a strawberry tart that apparently comes really close to a Bakewell tart. This recipe calls for grated strawberries that need to be put into the crust, together with eggs, breadcrumbs, sugar and butter:

To make a tarte of strawberries.
Take and strayne theym with the yolkes of foure egges, and a little whyte breade grated, then season it up with suger and swete butter and so bake it.

The actual origin of the Bakewell tart/pudding remains, like for a lot of other dishes, relatively unclear. For the recipe below we went with our impression of Mrs Beeton’s recipe.

My experience with the recipe

For our version of the recipe, I used the shortcrust pastry. I found that I needed to add more water to the dough than I thought Mrs Beeton described. The dough also expanded more than I anticipated, hence why my crust may be a little thick for my liking. Next time, I will make sure to roll my dough out a bit thinner.

The filling looked like it was not going to be enough, but once it is in the oven and starts baking the filling rises and all was well. I also used sultanas on top of the tart instead of almonds because I have a mild allergy, but feel free to use the almonds anyway! They are tasty for sure.

Another thing I discovered is that it is best to let it cool completely before you cut it, otherwise the jam will stay runny and drip out. However, this version of the Bakewell tart is fairly easy to make. It also tasted very good! I hope you have fun baking your own. Enjoy! 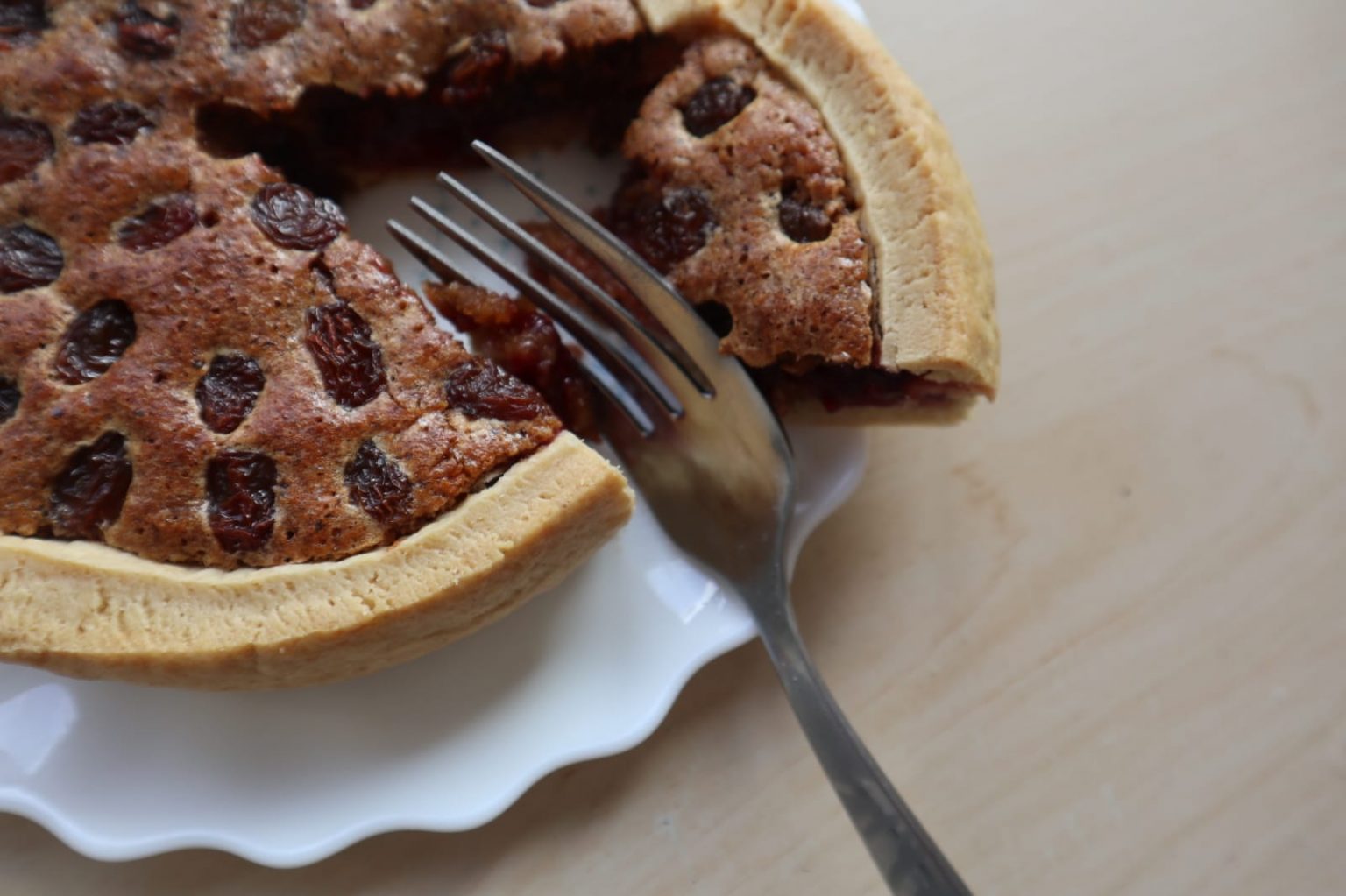 Method
Cream the butter and sugar well together, stir in the egg, add the breadcrumbs and a few drops of almond essence, and mix well. Line a dish with baking paper and with the shortcrust, add a good layer of raspberry jam and spread the filling on top of it. Bake about 25 minutes in a preheated oven at 200°C.

*For the shortcuts, there are two options: rich shortcrust, or just shortcrust.

Method
Rub the butter lightly into the flour, add the baking powder, sugar, egg yolks, and a little water if necessary. This paste must be rather stiff, not supple at all. Roll out to the desired thickness.

Method
Rub the butter and lard lightly into the flour, add the baking powder, salt, egg yolk, and as much water as is necessary to form a stiff paste. Roll out to the required thickness.