In an earlier blog we wrote about the history of Scottish shortbread: a delicious cookie, favoured by Mary Stuart, Queen of Scots, in the 16th century. Since today’s modern Valentine’s Day’s romantic appeal started with writers like Shakespeare, who was born in the 16th century, we once again highlight the cookie in our blog. Only this time, we are going to add decoration so you can surprise your loved ones or treat yourself and have fun baking in these strange times.

This article was written by Lorin Posthumus, volunteer at eet!verleden. She also took the pictures for this blog. Lorin is writing a blog series about the food history of England.

Valentine’s Day is the day on which we express our love for our loved ones, especially our significant others. We are expected to smother them in red roses, gifts and sweet treats. It has not always been as rose-coloured as today. Back in roman times, the Lupercalia festival was held from 13 until 15 February. It was a fertility feast where people, quite literally, hit on each other. Couples were put together by the men drafting a woman’s name, which made her his for the whole of Lupercalia.

In Late Antiquity, when the Roman church wanted to baptize all the Pagans into Christianity, they duped Lupercalia into Valentine’s Day. The day was probably named after a martyr named Valentine, bishop of Terni (Italy). Although…14 martyrs named Valentine are known.

But when did it move towards the Valentine’s Day as we know it, with all its paper cards and sweets? It wasn’t until writers like Chaucer and Shakespeare wrote romantically about Valentine’s Day that paper cards became a token of love. Geoffrey Chaucer wrote in 1382 in his Parliamant of Foules, a poem for the engagement of King Richard II of England (for whom a cookbook was written too!):

William Shakespeare wrote in his play The Tragedy of Hamlet, Prince of Denmark in 1600:

Toemorrow is Saint Valentine’s day,
All in the morning betime
And I a maid at your window
To be your Valentine.

From the 15th century on, writing poems, sending postcards or notes and giving presents was done on Valentine’s Day in England, France and Belgium. It is not known in The Netherlands as far as we could find in our little research. It was not until the end of the 19th century that sending postcards and presents on Valantine’s Day became a tradition in The Netherlands.

The decoration we mentioned before, that we are going to add to our shortbread, is called ‘Royal Icing’. Stories go that this icing got popular when Queen Victoria’s and Prince Albert’s wedding cake was covered with it and that this is why it is called ‘Royal’ Icing. Before, it was just called ‘Egg white’ icing, since this is what it is made of. Queen Victoria’s wedding cake made the icing so popular that it was adopted as a royal tradition and even Prince William and Katherine Middleton held on to the tradition and added it to their wedding cake. If that does not make it the perfect romantic icing…

Much like the recipe for Scottish shortbread, we found multiple recipes for Icing in Mrs. Beeton’s Book of Household Management. As you can see, Mrs. Beeton had recipes for multiple flavours of icing: 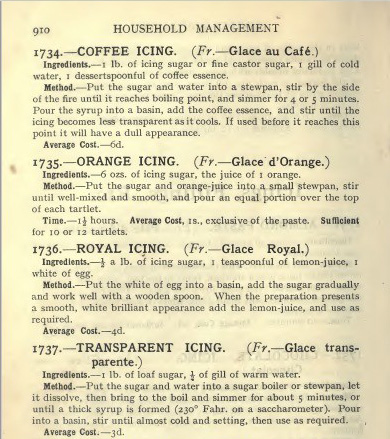 For our Shortbread decorations we went for the traditional Royal Icing, but we are sure that any kind of flavour would go well with the shortbread cookies since they have a very neutral taste to them. The only icing using egg white is our Royal Icing recipe. The others are made with water, sugar and different kinds of flavourings. Since we use a raw egg white, we would not advice pregnant women to use this kind of icing. The only thing we had to adapt to Mrs. Beeton’s recipe was to add a little more lemon juice than she did, because we preferred a more runny batter. It turned out to go perfectly well with the shortbread.

The recipe for Scottish Shortbread and it’s history you will find in this blog.

*If you’re not a fan of a lemony flavour, add water instead of lemon juice. Or do as Mrs Beeton does: use orange juice or a bit of coffee essence mixed with water.

Preparation
When the cookies are cooling, separate the egg white from the yolk. Whisk the egg white until it becomes white and thicker in consistency. Make sure you whisk it until you can form stiff peaks with it. You can see it has stiff peaks when you lift your whisk up from the batter and it stays up.

If the icing is too thick for your liking, you can add a little more lemon juice or water. Thicker icing is very suitable to use for any lines you want to create. Thinner batter is very useful when you want to flood the inside of these lines you’ve created. The lines will function as a border so the icing does not flood over the edge of your cookies.

Hopefully you have a lot of fun baking and creating all kinds of stunning Valentine’s Day cookies for your loved ones, or yourself! 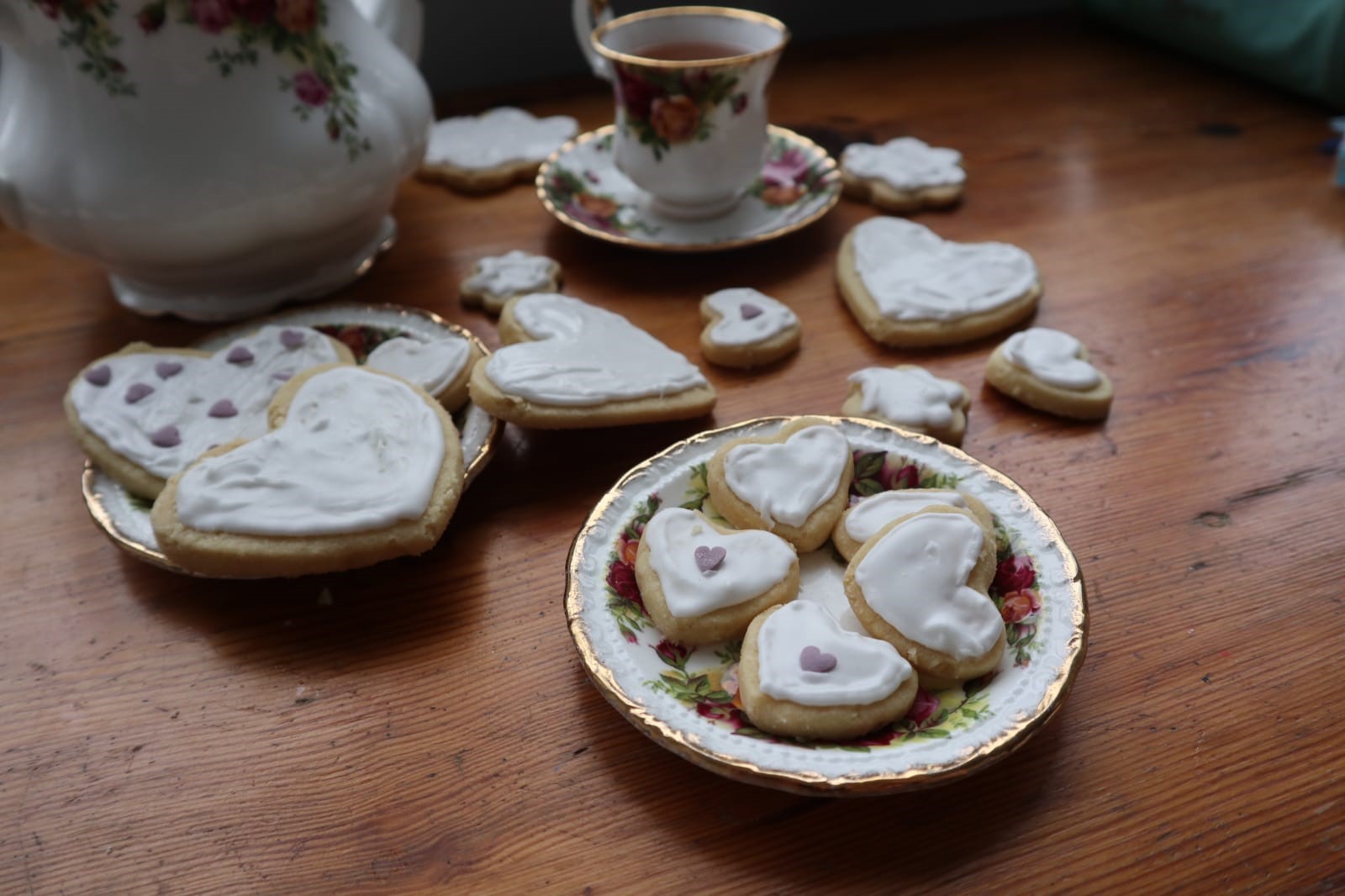