Romans were sweet tooth. But how sweet was sweet in ancient Rome? The answer to this question isn’t as easy as it seems: while today we tend to divide foods by basic flavour profile – sweet, salty, sour and so on – these lines were much more blurred in antiquity.

If we think off sweet flavours, we think “sugar”. Nowadays we can’t imagine a life without it. The sugar that we eat today is mostly beet sugar. In ancient history this was unknown. Ancient cultures did know cane sugar, both as a juice and granulated. It must have been Alexander the Great’s campaign to India where sugar cane was first introduced to Europeans, as a juice from “reeds that are sweet by nature” as Strabo (64 BC-23 AD) wrote when he cited Erastosthenes. The first know mention of granulated sugar is by Dioscorides (40-90 AD) who wrote in his De Materia Medica:

a sort of crystallised honey….not unlike salt in its texture and it can be crunched between the teeth like salt.

There are hardly any recipes from classical antiquity that contain sugar. It must have been an expensive ingredient in Greece and the Roman empire. It is only found in recipes for medicine, like the one in Galen (129-199 AD) for Garon tou Ioachou which is “beneficial for everyone”. This was a strange kind of fermented concoction with breadcrumbs, dried fruits, sugar, honey, a lot and plenty of herbs and spices, all mixed with water. It doesn’t sound like a nice drink. So, in antiquity sugar remained in the medicine cabinet.

What then did Romans used to sweeten their dishes? There were three main ingredients used in recipes: honey, (dried) fruits and grape must or wine. Honey was the most frequently used. In the Roman cookbook from the first century, attributed to Apicius, honey was used in 219 recipes out of 459, that’s almost 50%!

Fruits, and especially dried fruits, were also used to give dishes a sweet flavour. Fresh apples or peaches in a pork stew, elderberries in an oven dish and myrtle berries in meat faggots are good examples of dishes in which fruits gave the food a subtle sweet flavour. Dried fruits gave an even sweeter taste. In the Apicius text a lot of dates and raisins were used for this purpose. Sometimes also dried figs and apricots.

The most interesting sweeteners are the ones made from grape juice: reduced grape must and wines. There was a whole range of them: sapa, caroenum, defrutum and also real wines like passum and mulsum. The latter was a wine that was sweetened with honey, and passum was made from dried grapes and therefore sweet of its own. 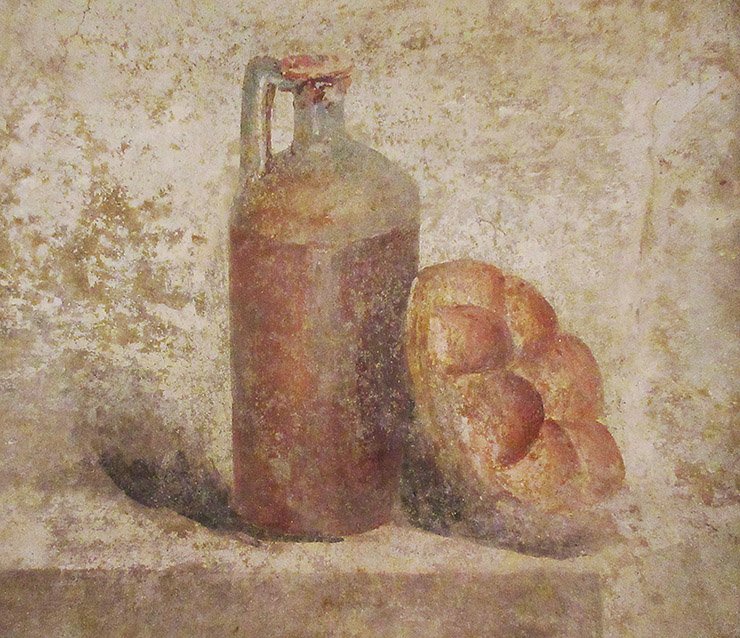 It is not entirely clear what the exact difference is between sapa, caroenum and defrutum. Sapa was possibly a more general term for a cooked grape must syrup. (Apicius used it only once to conserve black berries or mulberries). Caroenum and defrutum must have been a specific kind of sapa. Caroenum was clearly used to add liquid to a dish in the Apicius text, almost the same way as when wine was added. Palladius (late fourth or early fifth century AD) said that caroenum is reduced must that has been cooked down to a third of its volume. This would have been quite sweet. Defrutum was used the most in the Roman cookbook and probably was the sweetest and thickest of all these syrups. When added to a recipe it was more like a seasoning than a liquid. Sometimes a recipe says “add defrutum to add color” or “so that it is sweet”. We will probably never know the exact difference, but we do know that these ingredients gave sweet flavour to a dish.

While the Romans may have had a sweet tooth, there aren’t many recipes for desserts or pastries handed down to us from history. In multiple sources you sporadically find mentions of biscuits, cakes and dessert, like dishes with fruit or (sweet, soft) cheese of which we know that they were eaten at the end of a meal or as a snack in between meals, sometimes as an appetizer. However, Apicius hardly describes any real sweet dishes or desserts that fit our modern definition.

Recipes that we might think of as desserts or sweet dishes today, often aren’t. Mostly these recipes are combined with seasonings or ingredients that we define as savoury, like pepper, cumin and garum (fishsauce). What about a fruit custard with pepper, cumin and garum, roasted sweet peaches with a cumin sauce or an oven dish with nuts, honey, milk and fishsauce? 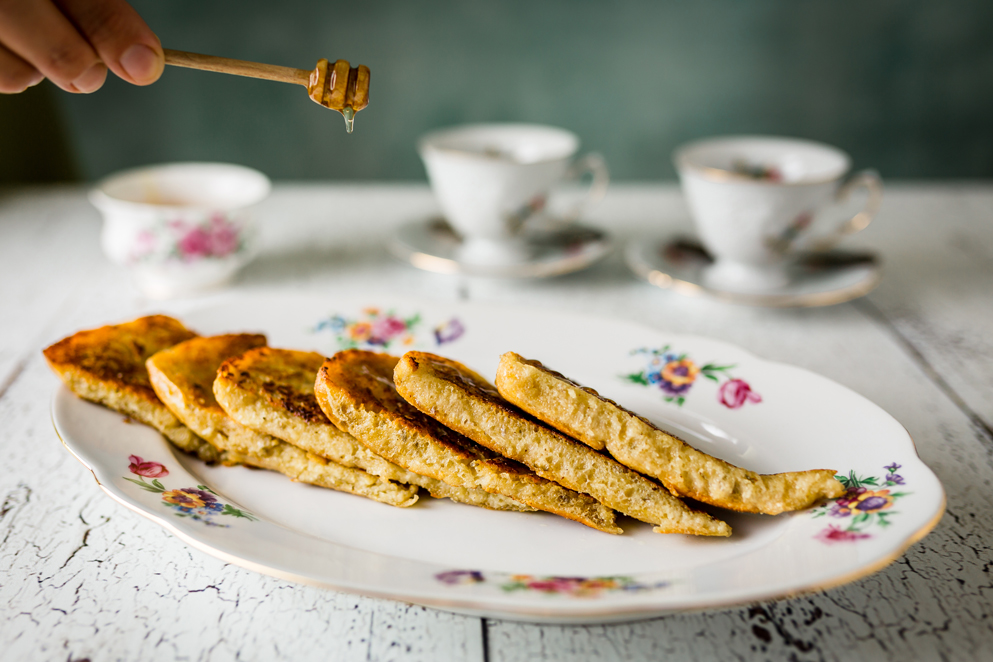 On the other hand, many dishes that we think of as savoury contained the sweet ingredients mentioned above. Most of the 459 recipes in the cookbook had one of the sweeteners as an ingredient! Recipes with meat, fowl, grains, fruits and eggs were the sweetest. In these honey, dried fruits and also often one of the syrups or sweet wines were used. Recipes with vegetables, legumes and fish were less sweet, although a sweet wine or syrup was often used in these dishes, too.

Today there is a fairly strict line between savoury and sweet dishes. This was totally different in antiquity, where sweet and savoury made a good marriage. Almost a perfect one, I would say. According to our modern palettes, Roman savoury dishes are quite sweet, and most of their sweet dishes are strangely savoury.

A cold dessert from Apicius

I wanted to make you a sweet Roman dessert. I had to look hard for one without garum, but here it is. A lovely semolina pudding…with pepper! Apicius says:

You make a cold dessert like this: boil alica [a kind of semolina] with pine nuts and almonds which have been soaked in water and skinned and washed in some ‘silver’ chalk so that they are all equally white. Add to this raisins, caroenum or passum. Sprinkle ground pepper over the top and serve in a dish.

*The wine has to be sweet! I used the Roman sweet and spiced wine conditum.

Preparation
Roast the almonds in an oven until golden brown. Chop finely.

Roast the pine nuts in a pan until golden brown.

Put wine and water in a saucepan and bring to a boil. Add the semolina. Stir until smooth. Add pine nuts, almonds, raisins and pepper. Let the semolina cook for about 3 minutes. Stir regularly, or it will stick to the bottom of the pan. In the end you have a tick porridge.

Rinse 4 small molds with cold water. Pour the pudding in the molds and let them cool in a fridge for about an hour.

Turn the molds over on 4 dessert plates and sprinkle with ground pepper. If you want, you can serve them with chopped roasted nuts and a bit of honey poured over. 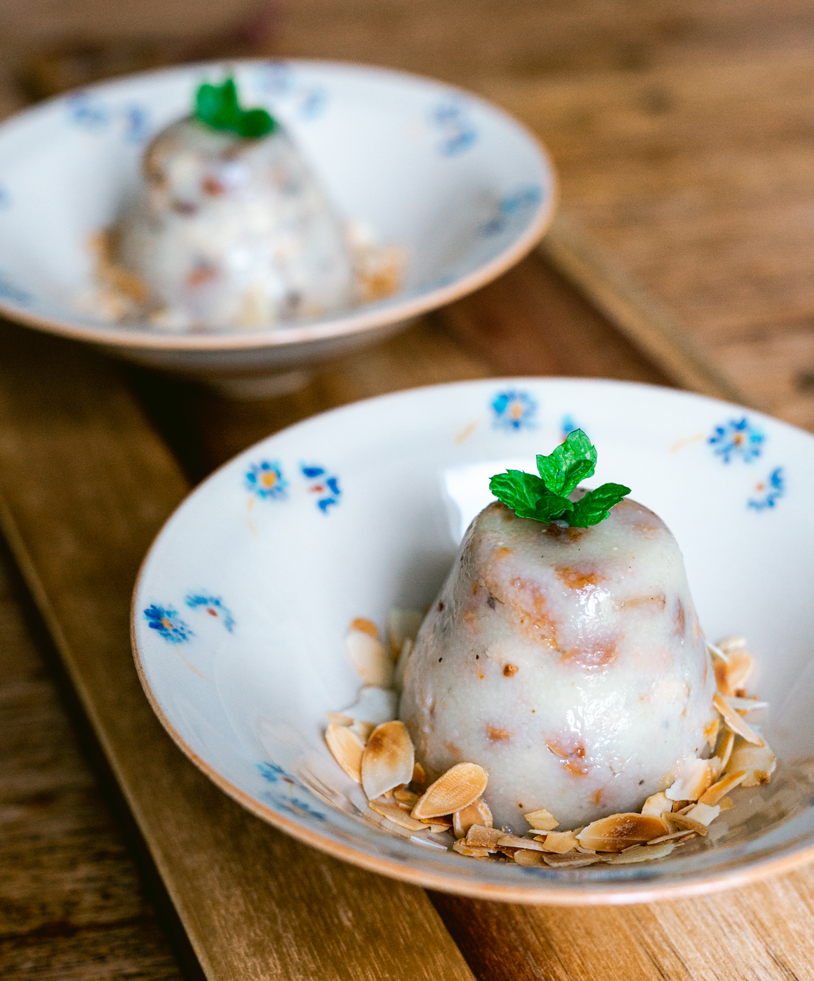 I wrote this article for Ancient History Magazine.